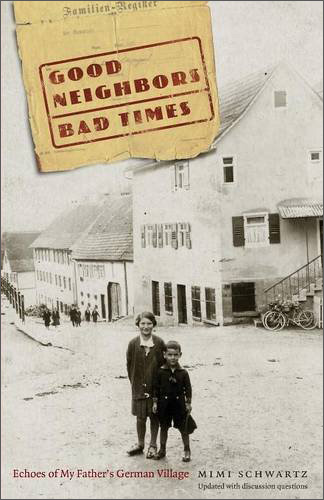 “Good Neighbors, Bad Times is utterly riveting. It reintroduces, one story at a time, the kind of human complexity to our understanding of the perpetrators so often lacking when we confront the devastation of the Holocaust. Her book casts a ray of light into the darkness, which was not so absolute as it has often seemed.” —Rosellen Brown, author of Tender Mercies

“Mimi Schwartz has found a fresh way to write about the unspeakable loss of the Holocaust: her humor, warm humanity and honesty, her appetite for contradiction and irony, sparkle on ever page. The result is both deeply affecting and full of surprises.” —Phillip Lopate, author of The Art of the Essay

Mimi Schwartz sees a Torah that had been rescued on Kristallnacht—not by Jews, but by their Christian neighbors. Who saved it and why? So begins Good Neighbors, Bad Times: Echoes of My Father’s German Village, her twelve-year quest to find out how neighbors in one small village where “everyone got along before Hitler” negotiated decency during and after Nazi times–and what that means for us, as neighbors today.